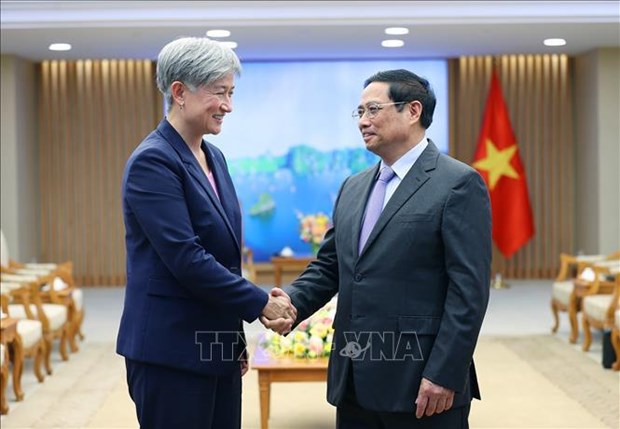 Praising Australia’s successes in the federal election, COVID-19 vaccination and economic recovery, PM Chinh thanked the
nation’s provision of COVID-19 vaccines, medical equipment and supplies for Vietnam during the
fight against the pandemic, particularly 14.4 million doses of vaccine for
Vietnamese children.

The PM also lauded the strong growth of the
Vietnam-Australia strategic partnership. The exchange of high-level delegations and meetings have been held regularly between the countries; bilateral trade hit 12.4 billion
USD in 2021; Vietnam began investing directly in Australia; and the two nations
approved the Vietnam-Australia Enhanced Economic Engagement Strategy and a joint
statement on commitment to practical climate action, according to the government leader.

He suggested the new Government of Australia continue paying attention to strengthening ties with Vietnam, particularly in
the exchange of high-level delegations; implementation of cooperation mechanisms
and key pacts signed; and promotion of trade-investment, education-training,
culture, tourism, and people-to-people exchange.

The two nations should study and propose specific concrete cooperation projects in other potential sectors such as climate change response, green
growth, digital economy, cybersecurity, and high-tech farming, he said.

For her part, Wong affirmed that Australia highly valued Vietnam’s role and position in the Association of Southeast Asian Nations (ASEAN), the region and the world and is committed
to continue strengthening the strategic partnership with Vietnam to make the bilateral relations more practical and effective towards a new height.

The minister commended Vietnam’s commitment to
achieving net zero emissions by 2050 and said she will work closely with
Vietnam in this area.

Australia will continue giving priority to cooperation with the
Mekong sub-region and agreed on the need to maintain peace, stability,
security, safety and freedom of navigation and overflight in the East Sea as
well as to respect international law, including the 1982 United Nations
Convention on the Law of the Sea (UNCLOS), she said.

On this occasion, PM Chinh asked the minister to convey his invitation to Australian PM Anthony Albanese to pay an official visit to Vietnam at an
appropriate time./.