The yuan received a boost last month when the International Monetary Fund increased the share of the Chinese currency in the Special Drawing Rights, an international reserve asset that also includes the dollar, the euro, the pound and the yen.

Reflecting the Chinese currency’s increasing clout, the IMF raised its yuan weight 1.36 percentage points to 12.28%, making it the third-largest in the IMF’s official reserves behind the dollar and the euro.

Given that Beijing’s stated goal is to advance the internationalization of its currency and limit the financial power of the West, the IMF’s decision has significant geopolitical implications.

Following Russia’s exclusion from the Society for Worldwide Interbank Financial Telecommunication (SWIFT), there has been speculation that Beijing will help Moscow circumvent financial sanctions imposed after its invasion of Ukraine via its Cross-Border Interbank Payment System (CIPS) that utilizes the yuan. In fact, one of the reasons behind the IMF’s decision to expand its yuan reserves was the increased use of CIPS by banks worldwide.

Less known is the role that Europe is playing in bolstering China’s monetary ambitions.

While the Group of Seven has imposed sanctions on Russia and they could do the same to China if it invaded Taiwan, the fact that Europe supports the wider use of the yuan in cross-border international payments should raise concerns among the U.S. and its Asian allies.

Outside mainland China and Hong Kong, Europe is home to the largest number of banks that use CIPS to clear yuan funds used to finance projects under Beijing’s Belt and Road Initiative.

At the end of March, there were 169 European banks with indirect access to services provided by CIPS, out of a total of 1304 participants, the majority of which were located in Asia. The growing perception of the yuan as a safe haven, coupled with the prospect of a bigger use of the Chinese currency for cross-border payments, is pushing European banks to position themselves in the emerging market of yuan trading and services.

According to SWIFT Business Intelligence, in April, Europe was second only to Hong Kong in cross-border yuan transactions. Overall, Europe clears around 10% of the world’s yuan-denominated payments and there is every reason to think that Europe’s market share will continue to rise.

As Chinese companies do not have unlimited access to foreign currency to pay their European counterparts and China is Europe’s first trading partner in terms of goods, the use of CIPS and the digital yuan is expected to grow.

Moreover, it is becoming increasingly easier for European businesses to invest their yuan earnings in yuan-denominated financial instruments managed by European banks, including their branches in China.

During the negotiations on the Comprehensive Agreement on Investment (CAI), an accord that, if ratified, would boost trade and investment relations between the EU and China, the European Commission obtained binding commitments from Beijing to expand market access for European banks and financial institutions across the Chinese mainland.

In the same vein, Europe is promoting financial ties with China. Stock exchanges trading Chinese securities and market-connect mechanisms linking to Chinese exchanges have emerged in the United Kingdom, France, Germany, Italy and Luxembourg. Several European bourses are sponsoring special China exchanges for Chinese securities, such as the London-Shanghai Stock Connect, which was launched in June 2019.

Germany is at the forefront of these developments. Launched in November 2015 and based in Frankfurt, the China Europe International Exchange is a joint venture established by Shanghai Stock Exchange, Deutsche Borse Group and China Financial Futures Exchange. It is the first dedicated trading venue for yuan-related investment products outside the mainland. France is intent on developing a similar connect mechanism between Euronext Paris and the Shanghai Stock Exchange.

At the last China-France High Level Economic and Financial Dialogue held in December 2021, the two sides launched a cooperation fund with the involvement of China Investment Corporation, BNP Paribas and leading global investment group Eurazeo to boost the cooperation fund’s role as a cross-border investment platform and promote the use of the yuan among French businesses.

Almost all of Europe’s central banks, as well as the European Central Bank, currently accept the yuan as a viable reserve and have signed swap agreements with the People’s Bank of China.

True, the dollar still remains the preeminent reserve currency, as demonstrated by the composition of the IMF official foreign exchange reserves. Yet, the yuan’s share is growing, thanks also to European policymakers who hold positive views regarding an increased role for the yuan in the world economy.

As Italy’s current Prime Minister Mario Draghi declared in November 2015 when he was President of the ECB, making the yuan a world currency would not be bad for the euro. 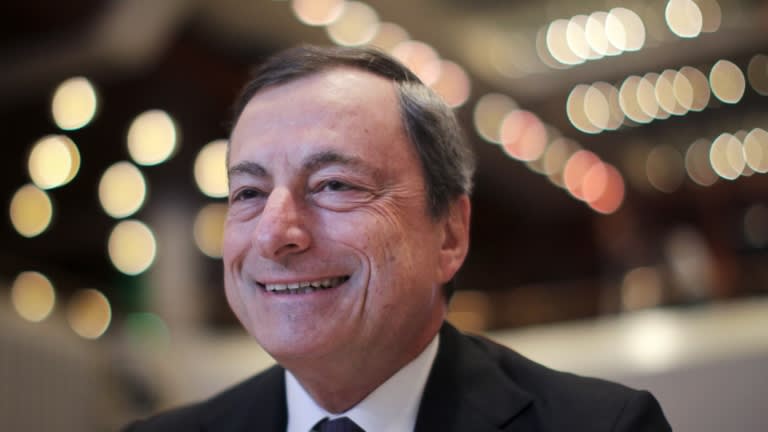 Mario Draghi declared making the yuan a world currency would not be bad for the euro.

Contrary to the Europeans, the U.S. has traditionally opposed the yuan’s inclusion in the IMF’s official reserves, criticizing Brussels for not considering the fact that the yuan does not yet meet the criteria for reserve status.

This would require China to open its capital accounts, meaning that companies, individuals and banks could move money without overbearing rules and government approvals, let its currency float freely and loosen government control over its central bank. None of this has happened.

In March, nine U.S. Senators from the Republican Party introduced the “Say No To the Silk Road Act” that aims to limit the use of the digital yuan on the grounds that it could allow countries such as Russia to bypass global financial systems like SWIFT and empower the Chinese Communist Party to collect users’ personal data.

Europe’s support for China’s CIPS and, more generally, for wider global use of the yuan risks not only emboldening Beijing at a time of growing U.S.-China tensions but undermines future sanctions in case of a conflict over Taiwan.

To avoid splitting liberal democracies to China’s benefit, there is an urgent need for increased coordination within the G-7 over China’s monetary ambitions, even if that includes in the meanwhile, questioning Europe’s support for the yuan.