Stephen Givens is a corporate lawyer based in Tokyo.

The resignation of IR Japan Holdings’ COO Takuji Kurio for “personal reasons,” just a few days before news that he is under investigation for insider trading, caps a spectacular implosion in the stock price of Japan’s leading “investor relations consultancy.”

The collapse in IR Japan’s stock price, one hopes, marks an inflection point in corporate Japan’s panic over shareholder activism. The main reason for the fall seems to be dawning market awareness that demand for IR Japan’s help in fighting off activists is finite. The recent insider trading scandal is merely incidental to the larger story of limited demand. 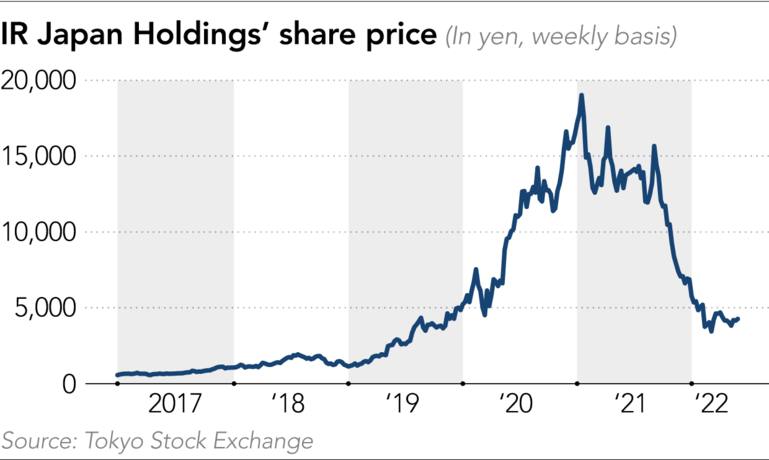 IR Japan’s 19-times rise in stock price from 1,000 yen to 19,000 yen per share between 2018 and 2021 was wildly disproportionate to revenue growth over the same period. The market, we now know, was wrong to anticipate that demand for IR Japan’s services, led by high-ticket anti-activist crisis management services, would continue to grow exponentially forever.

IR Japan itself fanned expectations of galloping growth by publishing an annual revenue forecast of 12 billion yen for the fiscal year 2022, a 45% increase over 2021. The stock price ticked up to 15,630 yen following that forecast.

But financial information for the second and third quarters of fiscal 2022 disclosed that the aggressive forecast was unlikely to be met. Halfway through the year, only 4.2 billion yen in revenue had been booked, 6.1 billion yen through the first three quarters. The stock price fell to 8,710 yen following second-quarter results, down to 3,940 yen after third-quarter results.

Without revising its forecast, IR Japan reported that there had been “delays” in its “pipeline” of lucrative anti-activist business, implying that the promised revenues would eventually materialize after the unexplained cause of the delays had been sorted out. The implication that the failure to meet the forecast was simply a timing issue was highly unpersuasive, given that activists, not IR Japan’s clients, control the timing and volume of demand for anti-activist services.

Former Nomura banker COO Kurio owned 16,100 IR Japan shares, worth a mere 300 million yen at the peak. He is suspected of having sold some or all of his shares before the public release of disappointing financial results. Given the modest size of his holding, the few million yen he saved by insider dumping was trivial compared to the reputational damage to himself and his company when he was caught.

Kurio’s modest holding was nothing compared to CEO Shiro Terashita’s 50% stake in IR Japan, worth 170 billion yen on paper at the peak. He is now 149 billion yen poorer, with his stake shrinking to “only” 21 billion yen. No need to shed tears for the collapse of the IR Japan bubble. It is still trading at five times its IPO price.

The CEOs and boards of directors of Japan’s 3,000 odd Tokyo Stock Exchange-listed companies should be asking themselves what value they deliver to their shareholders by hiring IR Japan, at a few hundred million yen a pop, to “defend” against activist proposals for higher dividends, share buybacks and disposition of noncore assets and “strategic” shareholdings.

A CEO and board of directors who believe they need the help of an outside adviser, much less a corporate governance-challenged adviser like IR Japan, to explain the issues to their shareholders demonstrate their own lack of conviction and confidence. A confident CEO would, if she really believed it, make her case against an illegitimate activist on her own feet and in her own words.

The knee-jerk response of listed Japanese companies on the receiving end of demands and proposals from activist shareholders in recent years has been to hire, at considerable expense, IR Japan and one of the large domestic law firms to hunker down in a defensive crouch.

The collapse of IR Japan’s stock price portends a day, not too far in the future, when shareholder proposals will not be reflexively rejected but considered, and responded to, with intelligence and sophistication by Japanese CEOs and boards in their own voice.

IR Japan’s fall from grace is a shaft of sunlight breaking through the clouds.