Australian dollar: the currency that can’t catch a break

TOKYO — When Australia’s central bank shocked markets by raising interest rates by half a percentage point last week, twice as much as expected and the largest rise in over 20 years, the news jolted the Aussie dollar higher. For about an hour.

The quick reversal was in keeping with the behavior of a currency that can’t seem to catch a break. At 71.2 U.S. cents in late Friday trading, the Australian dollar was 1.4% lower against its American counterpart than it had been at the start of the week. It is down 8% over the past year.

On its face, that looks surprising. Australia is a commodities-exporting country at a time of booming commodities prices. It is generating trade and current account surpluses. First quarter gross domestic product growth was 0.8%, ahead of market expectations. The unemployment rate is the lowest since 1974.

But global forces are dominating. These will be on display again this week when the policymakers at the Federal Reserve in Washington are expected to raise U.S. interest rates by a half-point of their own. That will be on top of 0.75%-worth of rises already this year.

Junichi Ishikawa, senior foreign exchange strategist at IG Securities, said the Fed’s aggressive moves and the resulting strength of the U.S. dollar are acting as a headwind for the Australian currency.

“It’s the U.S. interest rate that is factored into the market most. Although the Reserve Bank of Australia finally moved to raise rates aggressively, it has not yet caught up with the Fed,” he said.

Forex traders are also nervously watching the latest headlines from Shanghai and Beijing, where new COVID restrictions have been imposed. The Aussie dollar’s performance hangs in large part on the strength of the economy in China, Australia’s biggest trading partner. China imposed two months of lockdown in Shanghai, the country’s biggest city, that ended only a fortnight ago; the speed with which the Chinese economy recovers from that trauma will be key. Andrew Ticehurst, senior economist at Nomura Australia, said he is “cautious” about China, given Beijing’s zero-COVID policy. “China’s growth momentum is still quite weak. Until the economy fully opens, or until China develops and uses mRNA vaccine itself, its growth momentum will not properly recover.”

China’s official manufacturing purchasing managers’ index (PMI) in May was 49.6 points, below the 50-point line separating contraction from expansion for the third consecutive month. The country also saw a 2.9% fall in its industrial output in April from a year earlier, the largest decline in over two years.

Although the relationship between Beijing and Canberra has soured dramatically in recent years, China remains Australia’s biggest customer and also the largest consumer of major commodities globally. Australia accounts for roughly 60% of China’s iron ore imports, for example, a vital source of raw material for what is the world’s biggest steel industry.

But China’s iron ore imports from January to April fell 7% from the same period last year. Reflecting the sluggish Chinese demand, the benchmark iron ore prices fell 18% to $133 per ton in June from early April.

Australia’s other major commodity exports, coal, gas and wheat, remain elevated in price, but traders have focused on iron for its status as a bellwether of the Chinese market and hence a warning sign for the Aussie dollar. Traders have preferred other commodities currencies, such as the Brazilian real and even the Canadian dollar this year.

Global commodities prices have been kept high by inflation and by moves in some countries to halt exports in order to secure supplies and tamp down price rises at home. Russia’s invasion of Ukraine disrupted supply chains and triggered sanctions affecting its exports. 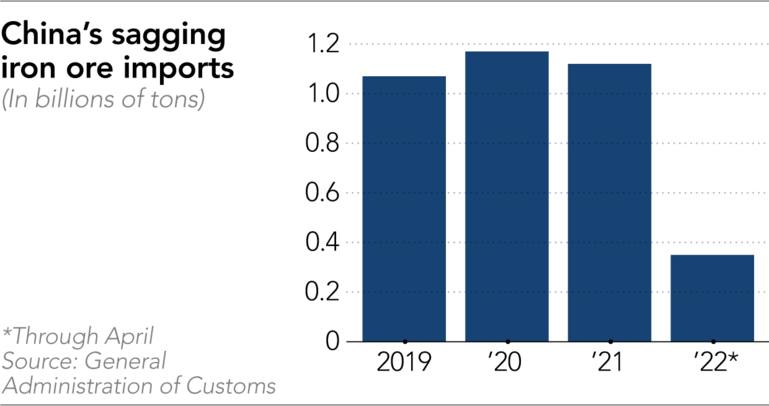 Doubts remain, though, about how long the price boom can last if higher interest rates bring economic growth down along with inflation.

The Australian dollar’s negative response to last week’s rate rise underscores the dilemma for policymakers not just in Canberra but in central banks across the globe. Commonwealth Bank of Australia on Thursday slashed its forecasts for Australian growth in response to the increase, which comes as the country’s housing market is already wobbly. Central bankers may be “very intent on dropping the inflation rate quickly,” Gareth Aird, the head of Australian economics at CBA, wrote in a client note quoted by Bloomberg. “But this will come at the expense of growth in aggregate demand, particularly household consumption.”

There is also the U.S. economy to worry about, as well as China. “The biggest risk is the slowdown of the U.S. economy as a result of the Fed overkilling the economy with too much hike,” said Daisaku Ueno, chief FX strategist at Mitsubishi UFJ Morgan Stanley Securities. “That will result in a global recession, a fall in commodity prices as well as the Australian dollar.”

Marcel Thieliant, a senior economist at Capital Economics, agreed that “if commodity prices do start to fall again by the end of the year, that will probably also point to a weaker Australian dollar.”

Not everyone is bearish, however. “The resultant [Aussie dollar] surge was short-lived as risk sentiment weakened,” Barclays economists conceded after the rate increase. But they pointed to expectations of more tightening to come. Markets are pricing in additional half-point increases in July and August after Philip Lowe, Governor of the RBA, talked about the “still very low level” of Australian interest rates.

Further moves would go some way to restoring the gap between Australian and U.S. rates, which has narrowed as the Fed has tightened this year. “The move in relative rates should help [the Aussie dollar] over the medium term,” Barclays said.

Peso remains among ‘most stable’ currencies in ...